A decision from the Federal Circuit Court of Appeals has refined what is required to show obviousness and anticipation in a pharmaceutical patent.  The patent involved lacosamide, an amino acid-like drug used in epilepsy treatment, shown below:

Accord, a generic drug manufacturer, submitted an abbreviated new drug application (ANDA) to the FDA seeking to manufacture and distribute a generic version of lacosamide, prompting the owner of the patent, UCB, to file a patent infringement suit.[i]  Accord challenged the validity of the lacosamide patent, arguing the UCB patent fails to meet the nonobviousness and novelty patenting requirements and that other UCB patents protect a patentably indistinguishable compound, known as nonstatutory double patenting.

The court renewed its obviousness and nonstatutory (obvious-type) double patenting tests for chemical compounds.  Acknowledging that a “lead compound” test is not required, the court approved of the test, which includes two elements: (1) what compounds would be selected in the prior art as a lead compound or starting point for subsequent study; and (2)whether the prior art provides a reason or motivation to modify that lead compounds to develop the challenged compound, with a reasonable expectation of success.[ii] The court went on to further define a lead compound as “[one] that would be most promising to modify in order to improve upon its … activity and obtain a compounds with better activity.”[iii]

In this framework, the court looked at references that disclosed the following structure: 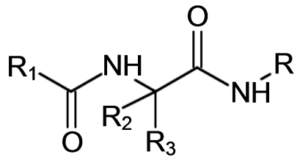 where the different “R” are “wild cards” that can be variously defined structures.  In the references, R was defined as, among other things, an aryl (like phenyl seen in the first image); R1 defined as a lower alkyl (small carbon chain without double bonds); R2 and R3 defined as one being hydrogen and the other an electron withdrawing alkyl.   The court found the reference’s compound did not suggest the specific combination, because as of the filing date, researchers were only modifying the R3 position and not testing modifications to the R1 and R positions.[iv]  Because the specific combination of moieties resulted in vastly different effectiveness and shelf-life, the court found the references failed to render the claimed compound obvious.[v]  Additionally, even a disclosure of a racemic mixture was not found to render the claimed compound obvious if the racemate lacks effectiveness.[vi]  The court also found that a presumedly enabled group of compounds does not prevent a court or examiner from finding no expectation of success in creating a compound that would be included in that group,[vii] meaning that even if a reference shows some evidence for how to make a group of compounds, it does not necessarily prevent patenting a sub-group of compounds.

The court’s handling of the anticipation issue was particularly interesting, as the claimed compound was challenged as lacking novelty in light of the racemic composition, which inherently includes the specific enantiomer.[viii] The court agreed with the District Court, stating

“[t]he knowledge that enantiomers may be separated is not ‘anticipation’ of a specific enantiomer that has not been separated, identified, and characterized.”[ix]

Thus, it appears the Federal Circuit has now taken a hard line on inherency in the pharmaceutical fields