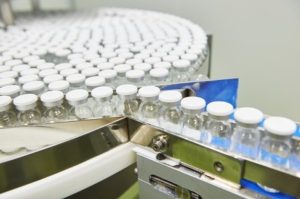 Aprecia Pharmaceuticals LLC has been marketing the drug levetiracetam under the name Spirtam®, as an anti-seizure.  What caught my attention was the carrier for the drug, which was printed using an additive manufacturing technique, also known as 3D printing.  This technology has been widely publicized over the last few years, and used to make automotive parts, aerospace parts, firearms, and medical devices, among other products.  Aprecia Pharma’s patented use of 3D printing for pharmaceutical compositions is a first,[1] and allows xenobiotics (drugs) to be made in highly porous matrix that dissolves in the mouth within a mean time of 11 seconds.[2]

In Spirtam®, Aprecia Pharma. possesses a patent covering 3D printing of a pharmaceutical powder, such as sugars (lactose, sucrose, fructose, xylitol, etc.) and microcrystalline cellulose that is held together by a binder, like arabinogalactan, polyvinylpyrrolidone, sorbitol mannitol, or xylitol.  The 3D printing forms complex microscopic structures having hollow spaces, with pharmaceutically active xenobiotics loosely associated with the porous structures. Once the route of administration is determined (such as intravenous/intraarterial, oral, intraperitoneal), the carrier material(s) can be selected to optimize dissolution properties of the drug.  What is just as amazing as the product is the effort needed to bring a drug, like Spirtam®, to market.

Various studies have estimated it takes 10-15 years to bring a product to market,[3] from preclinical testing through phase III FDA regulatory testing,[4] with only 0.1% of preclinical drugs reaching phase I testing, and 0.02% of the preclinical drugs reaching the marketplace.[5]  In the case of Spirtam®, a patent application on the technology was filed February 1998 and granted October 29, 2002.[6] The xenobiotic received FDA approval July 31, 2015,[7] seventeen years after the patent application was originally filed (and eighteen years after the priority, provisional application was filed). The direct costs associated purely with clinical studies amount to $59 million when averaged over the entire spectrum of therapeutics.[8]  However, due to the high failure rate, estimates to bring a new drug to market range from $320 million (Public Citizen)[9] to around $5.5 billion spent for each drug successfully introduced to the marketplace.[10]  Of this, the estimates are about half is in out-of-pocket expenses.[11]  By comparison, it is estimated that generics cost about $1 million to $4 million to bring to market, and about $100 million to $250 million to bring a biosimilar to market (and requires 7 to 8 years).[12] Given the staggering amount of time, money, and effort required to bring xenobiotics to market, and the relative low cost for generic manufacture, it is critical to have patents on technology to recapture the costs associated with this endeavor.

The patent system in the U.S. was developed to increase scientific and technical discovery and dissemination of that knowledge to the public.  Assuming an applicant meets the statutory requirements for a patent, a patent is awarded, allowing the patent owner to prevent others from making, selling, offering for sale, or importing the invention in the U.S.[13]  The resulting patent provides a 20-year monopoly on the invention,[14] based on the priority claim and priority date of the patent and subject to adjustment for delays due various governmental agencies, including the Food and Drug Administration’s review of an NDA or ANDA.

Thus, given the substantial investment in xenobiotics, both in development and bringing the compound to market, the costs associated with obtaining patent protection are minor.  Further, the exclusivity afforded by a patent permits recovery of the research and development costs, as well as regulatory studies required to bring a xenobiotic to market.